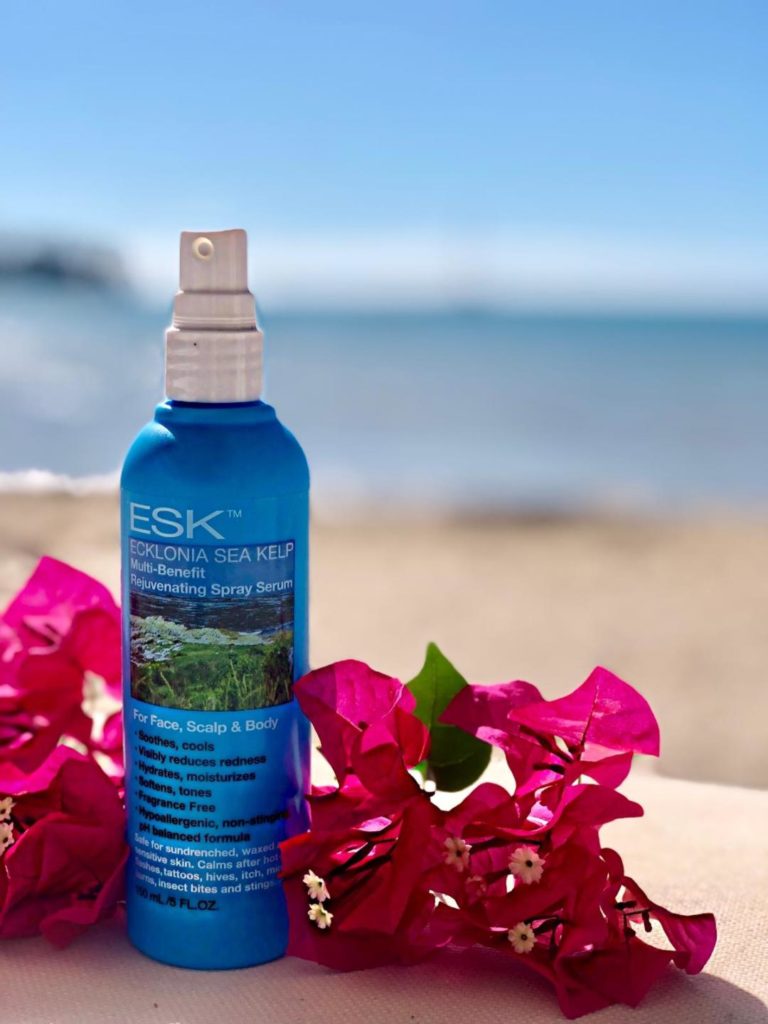 Miraculous kelp formula that doubles as a beauty serum and problem solver. Fragrance free formulation for rapid, calming, cooling, soothing relief for sensitive skin issues. Safe for use on:

As a beauty serum and/or essence water, integral in Asian skin care regimes, ESK hydrates and primes skin with micro-nutrients aiding with fast absorption of moisture enabling ingredients. Get more bang for your buck and do more with less! Prep skin with ESK first to get the best performance out of your favorite skin care products. Your skin will look and feel healthier! Patented, dermatologically, clinically and safety tested formula. Become a believer and try the powerful health benefits of kelp today!

ESK will revolutionize your all over body care. Biotechnology in a bottle, rich in marine macro & micro minerals, amino acids and vitamins revitalize your face, scalp and body. ESK will make you feel refreshed and look great too! 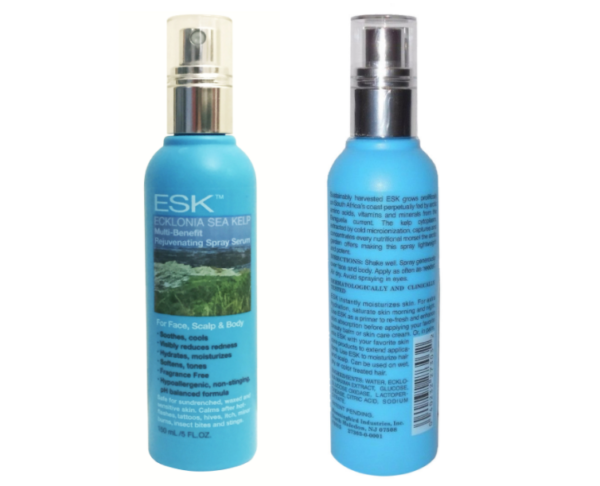 WHY DO I NEED ESK?

HOW DO I USE ESK?

Experience the ultimate multi-tasker! Unlock the Asian secrets of essence water and liberate your skin from discomfort. Sense the hydration of priming your skin with micro-nutrients and enjoy the feeling of rapid relief of distressed skin.  A lightweight yet potent spray. Use ESK to hydrate, refresh, revitalize and rejuvenate your skin!

HOW DO I GET ESK?

Purchase your ESK Skin & Beauty Treatment for only $25 + FREE SHIPPING!

Receive your package in the mail in just a few short days.

Start experiencing relief and healthy skin in a natural way!

I just recently had very, very bad hives on my hands. I tried RX creams and allergy meds and the only product that gave me immediate relief was ESK! ESK eliminated the itching, the pain, and the redness as soon as it was sprayed on my hands. My hives were gone within 30 minutes to an hour depending on its severity. On their own, the hives would take any were from 2-48 hrs to go away. This is a miracle serum. I highly recommend this product!! 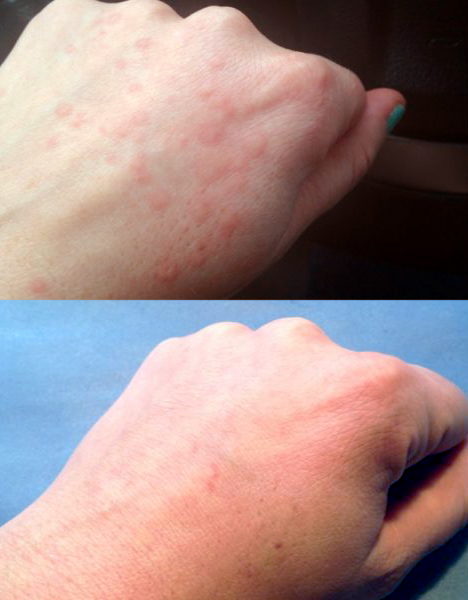 First time I used this product was summer of 2016, big BBQ Saturday night with family, accidentally left the spatula on top of the BBQ cover while cooking. Reached for the spatula and got a second degree burn on my hand. A friend gave me a bottle of ESK. I used it immediately. Took all the pain away, did get a blister, kept using the product, there was no pain through the healing process. I always keep a bottle in my kitchen and bathroom. I been using since for pain relief of headaches, skin rashes of all kinds, sun burns and especially for razor burns after shaving. This is an outstanding product. Can be used for anything. It does work!

I have used the ESK product for about 4 weeks. I thought there has been enough time to send you some feedback. The quick information is that I have had great relief. I have not experienced the outbreak of the blistery rash that usually follows the intense itching. The longer version is below.

I did not start to use the product immediately after receiving it because my skin outbreaks have been minimal since about September 2017.

However about the third week of December, an area in my upper right chest became inflamed, intensely itchy followed by an outbreak of a blistery rash. The outbreak can remain in a small area or it can be large. It typically lasts for two to three weeks leaving a dark discoloration. The problem really never goes away but as one rash is coming to the end of its cycle a new one appears in another area of my chest, abdomen back or buttock. I have experienced this cycle for as long as 18 months before I have had any sustained relief from them. The last cycle I had began in August of 2016 and tapered off in September of 2017.

In December when the itching and rash began again I immediately tried the ESK. To my great relief, it calmed the intense itching quickly. The rash did show up the next day but I sprayed the ESK whenever the itching started. The rash and itching were gone in two days. The rash did not spread nor did it reappear in any other area of my body.

I have been experiencing the intense itching on my chest and back areas mostly at night. Sometimes the itching is so bad it wakes me up. I spray the ESK on my skin and it seems to calm it down almost immediately. There has been no rash outbreak since using ESK on the itches.

I began experiencing skin problems in 1999, but the episodes were mostly short and in small areas. However, since February 2011 I have been plagued by this problem almost continuously with periods of remission the longest lasting about 2 years.

Also, I used the ESK on my daughter’s dog who has serious skin and other allergies. He is on a daily dose of Benadryl. He was scratching his belly until it was bleeding. In desperation, I decided to try the ESK. It worked almost immediately. I could not believe it.

Thank you for your help and your product.

Just wanted to touch bases with you regarding the numerous treatments I received for my recurring skin condition.  First, let me happily say that I have been free from any outbreaks since December.  Whenever I have felt the intense itching which typically has signaled the start of the rash, I spray the ESK on the affected area.  I get relief within a short period of time and it is the longest lasting relief of any of the treatments that were ever tried.

Prednisone for first week, Benadryl daily, various cortisone creams. While on the Prednisone the inflammation, rash and itching were relieved but returned soon after I stopped the medication.

The Benadryl and cortisone creams gave little or no relief.

One dermatologist said the appearance and locations of the inflammation and rash gave every indication that it was Dermatitis Herpetiformis (DH disease).  A biopsy was needed to confirm the diagnosis.  The biopsy report indicated negative for DH disease.  The condition was treated as a contact dermatitis but the cause remained unknown.  When the condition became out of control again in 2015 another biopsy was done for DH disease and it again came back negative.  Treatment was limited to creams, powders and Benadryl daily with very little relief.  I was informed that I may need to have several more biopsies (possibly as many as 6 more) before DH disease could be eliminated.

Over the years, I have consulted with several dermatologist and an allergist; none have been able to diagnose the condition or offer any long term successful treatment.

P.S.  Shingles was ruled out as the shingles virus attacks a nerve and remains on that nerve line.  I did have shingles in 2007 and while the rash for my skin condition is blistery it is smaller looking than shingles.  Also, this rash erupts on various parts of the body i.e. chest, upper back, lower back and buttocks either at the same time or can appear somewhere else as one area is clearing up.

I have used this product with exceptional results on almost everything you can think of, and continue to find more uses for it. I found uses and relief from ESK from a very painful ankle and heal, headache, arthritic joints, puffy eyes, hemeroids, insect bites, hives, rashes, red irritated skin from edema, irritated cuticles, aching knees and back pain. Acts as a great anti-inflammatory , and can actually see and feel results quickly. I am currently treating my dog’s facial tumors and irritated paws with much success. The tumors are still there, but not as big as they were before, and not as inflamed. My husband and son also have their own supply, and use it daily for neck pain, muscular and joint fatigue and soreness. I would definitely recommend this product with confidence, knowing customers will return to purchase more. My family and I will continue to use this product, and will recommend it for as long as it’s available. Great product, with great results. Relief as you need it. THANK YOU ESK!

I have a high sensitivity and allergies to various bug bites. Bees, red ants some plants and mosquitos just enjoy me. EpiPen has become my buddy.

Then came ESK. I tried it, it worked and I rate it a 10. I developed a method, yours may be different. Suggest you coat the area well with spray and in a circular motion, with my finger,gently rub the spray in. I found spraying every 5 to10 minutes, depending on the severity, until it starts to work. You will see and feel the itch-redness and swelling gradually disappear usually within an hour. That has been my experience.

3:10 A.M. I’m awakened because of an uncontrollable itch on my right index finger. This seemed to be no bug bite I’ve ever experienced before. It must be poison ivy.

Was working cutting and clearing an area for my wild flowers and guess I wasn’t careful enough this time. Trying to explain the feeling would be impossible. I decided

to give ESK a try using the same application as before only more often because of the intensity. I continued to use my developed pattern.

It does work people. Try it.

How do I love ESK….let me count the ways:

1.)  Since using ESK it has saved me money and the amount of facial serums and creams I use each and every day and night….by spraying my face with ESK before product applications I use much less product

2.)  I use ESK to stop bleeding when I cut myself shaving…..a spray or two cuts bleeding and speeds healing time

3.)  Most importantly, ESK has been so helpful with clearing up my chronic skin condition, Granuloma Annulare….I couldn’t believe it actually helped so much as nothing cures this condition….I have used steroid creams, lighteners, taken cortisone shots, and blood thinners….nothing helped!!!  For the heck of it I started spraying ESK on my hand after I sprayed my face…. the condition is nearly cleared up!!!!

I’m an ESK user for life!!!  Try it yourself and discover the many benefits!!!!💕

EXPERIENCE THESE
RESULTS FOR YOURSELF